Dear Dave is a series in which I address poor reviews of consumer goods in the advice column tradition of Dear Abby or Dear Sugar. Aren’t most online reviews a cry for help, anyway? 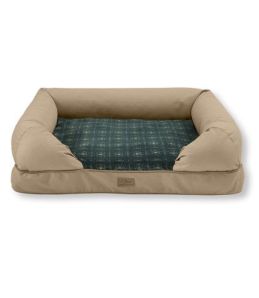 Dear Dave,
I bought this bed to keep my hairy beast off the furniture, figuring it was cheaper than replacing the couch. She still prefers the couch, the kitchen floor, the bedroom rug, anything, to this bed. The cat, however, seems to like it. The Extra Large would have probably fit 2 St. Bernards- it’s really big. And it is very very difficult to put together. I’m afraid now to wash it in case I can’t figure out how to put it back together. I’m very sorry I incurred such an expense because it’s not being used.
Frustrated
Western NY

Married couples are sometimes like citizens in closed countries. Think North Korea. Or the Soviet Union. They have alternate realities. People live there, they walk around, go to work, stand in food lines, fear the police. They do many of the same things that all people do, just in a closed-off parallel world. The citizens don’t know how different they are because their contact with other countries is all rumor and whispers. They suspect there’s something more, but they don’t know what it is. That sounds a little like your marriage, Frustrated. In your marriage country it’s ok to refer to your wife as a dog or “hairy beast”. And maybe she does have quite a bit of hair. However, it sounds like she prefers the floor or the rug instead of the bed because she doesn’t want to sleep with you! Out here, in the wonderfulfilling™ world of internet content and consumerism, she could remove that hair and you could find a therapist for men’s issues. In fact, that’s my recommendation. Seek therapy before you end up married to the cat. On a side note, we also wash our bedding out here in the modern world. Despite our fears of getting the fitted sheet back on the bed.