This is the twentieth installment of a series about the Mountain Dude, a wandering guy with an ESP-like “gift”.  The Mountain Dude, some readers may recall, made a few enigmatic appearances in JJ in the 21st Century. 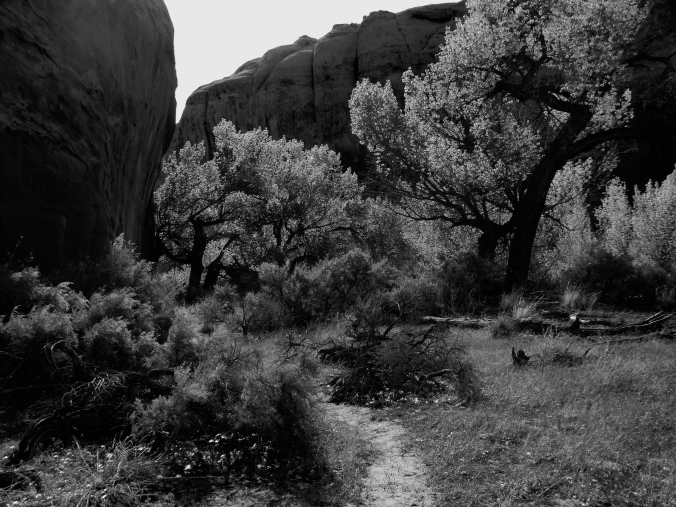 Have you ever been to Arches National Park? I have. It was made famous by Edward Abbey in the book Desert Solitaire, one of those foundation books for grouchy wilderness wanderers. It was a foundation book for me. My favorite line? “To refute the solipsist or the metaphysical idealist all that you have to do is take him out and throw a rock at his head: if he ducks he’s a liar.” Don’t worry, I had to look up “solipsist” too. (remember paper dictionaries?). Then I laughed.

Edward Abbey would hate the park now, I’m fairly certain. He would hate most National Parks. Paved roads, ease of access. Not Edward Abbey’s vision. People, all these fuckin people from all over the place. All these cars. They don’t belong here. So what do I do about it? Avoid. Reduce contact. Circumvent. Above all, avoid parking lots. That’s where humanity is at its worst. Parents and kids, both crying sometimes, as the kids get wrestled into car seats. Kids don’t like to be restrained, go figure. Parking lots are full of anxiety and impatience, men tapping steering wheels with barely controlled rage while waiting for old couples to move (MOVE!) so they can pull in and release their children from the restraints and walk across the searing hot pavement to a polluted bathroom and linger linger hurry up and wait.

Hey people! Staying home is an option too! It doesn’t look as good on social media, but think of all the people you haven’t pissed off by just staying the fuck home.

I do not enter the park through the main entrance. This is an advantage of not having a car. I hike up Courthouse Wash and camp (illegally) in one of the side canyons below the Petrified Dunes. It is calm and mysterious down in here. There is water in the wash and shade and many little birds flit among the cottonwoods. Something near to peace descends for the first time since leaving Colorado.

Very early the next morning I hike up the wash intending to hike clear across the Park. There is a main road with a parking lot that I must cross and I hope to do so quickly and anonymously just before dawn. I emerge and cross the road. In the parking lot there is one car. I know immediately

I turn to head quickly back across the road and down into the wash. But he’s standing right there in the road behind me.

“Come walk with me,” he says. His voice is warm. His clothes are vanilla neat, fitted polo tucked into tapered khakis. He is fit and tan like a golfer and looks completely lost in this Utah desert. But he doesn’t act lost.

“Come on,” he says. “You might want to hear what I have to say about your…power.”

“Your power, your problem, your extrasensory perception.”

We stand in the middle of the road in the dawn gloaming. The sky is reddening in the east. The Courthouse Towers loom nearby like some mad monument to a Martian God. Headlights approach from the south.

I think of that preacher back in Salida. “You don’t want to see his face,” he said. I could just start to see the rosy close-shaven cheeks, flushed with success. “Don’t get caught out in the open with him,” the preacher said.

“Allright.”   I follow him across the road and back down into the wash.

I never did listen to preachers.

One thought on “Desert Solitaire(?)”