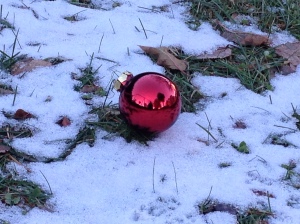 JJ’s sister, separated from her husband, had come to town and forced a meeting. He couldn’t hold her off forever. JJ thought a public place would be best, to reduce the chance of bodily harm. So they sat in a crowded café on a Saturday morning. He was hoping she wouldn’t make a scene.

“That was two and half years ago. And you can’t get your mind off my money.”

“Well, look at you, all happy up there in that ridiculous farmhouse. No farming. No actual work. Money will do that for you.”

JJ looked out the café window. Something about the winter before the snow, everything looking cold and brutal with the leaves gone and the grass dead. Maybe that’s why Christmas decorations took hold; so people wouldn’t kill themselves before Christ’s birthday.

“I’m happy for the first time in years,” he said.   “The money helps, but it’s not about the money.”

“So your girlfriend is back, is that it? Lulu or whatever?”

“So she’s back in the picture since the lottery?”

“She could care less about the money.”

JJ felt the heat rising, the coals of resentment fanned towards rage by this money-grubbing harpy who happened to be his sister. “They’ll dangle the bait,” Professor Tom, his sponsor, had said. “Family will do that.” And here she was, separated from her husband, dangling a big fat worm in front of his stupid trout mouth. “Oh, fuck it,” he thought.

“Funny,” she said. “He told me the same thing about you.”

“Don’t you ever think why we all hate each other?”

“Betty, we all hate you and you hate us.”

“We bond over mocking you.”

“He calls me just to wonder why you’re such a loser. That ‘dumbass loser’, I think was the exact term.”

Professor Tom had said it would go like this. “They won’t want you to get away. Even if it’s what’s best for you. It will unbalance the mobile.”

“The mobile?” he had asked.

“Families are like mobiles. Every member has their part to keep the balance, even if it’s all dysfunctional. If you leave the mobile, it will get out of balance.”

JJ looked at his sister. “I’m leaving the mobile,” he said. “You guys will have to rebalance without me.”

How the hell did she know about the mobile?

“Anyone who’s been in therapy since 1990 knows about the fucking mobile,” she said. “And you’re not leaving. At least without buying your way out.”

So this was it. She was shaking him down, offering to let him off the mobile for a price. Ok, then. Back to the beginning.

“I’ll be in touch.” She rose and stalked away, leaving him with the check.

“I’m sure you will,” he muttered. “Happy holidays.”

One thought on “The Holiday Shakedown”