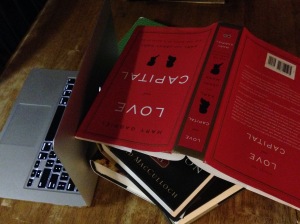 JJ surveyed the room from the tavern entrance. Square bar in the middle, full tables all around. TVs showing baseball playoffs and college football. A cozy Fall buzz in the room, chilly outside, warm inside. Saturday night. A good feeling for most, but this was not what JJ had in mind. The conviviality was toxic. He turned to leave.

JJ looked to his left and there in the corner was a large hairy figure with a semi-familiar sideways leaning posture and a twinkle in the eye. Holy shit, was that Shaboo? He said the name. “Shaboo?”

“As I live and fuckin’ breathe. Get over here and sit down,” Shaboo bellowed and several people turned to behold the beast and its prey.

“Quiet down, Shabby Boo,” someone yelled and several people at the bar laughed.

“They tolerate me here,” Shaboo said as he took JJ in an immense embrace. Shaboo’s flannel smelled of cut wood and mammal. He was a head taller than JJ and beamed down at him. He shepherded JJ to the corner table where books were stacked next to an open laptop. The top book was, “Love and Capital: Karl and Jenny Marx and the Birth of a Revolution”. Shaboo noticed JJ noticing. “I write in here sometimes,” he said. “Gets me out of my dank cave. There are actual folks in here.”

JJ had a strange feeling of interruption, of something happening of which he had not, could not, account for in his FUCK-IT! plan of self-destruction. He did not, could not, resist. Shaboo was a college friend and a force of nature. JJ knew he lived in the Berkshires but hadn’t thought of him in years. If he did think of him, it was with a smile at some old capers and a twinge of envy. Shaboo had published two pretty good novels. That twinge of envy would be full-on hatred if it was anyone but Shaboo. JJ hated earned success, especially writerly success.

JJ thought of his original intent. The imperiousness of his urge to get completely wasted was starting to dissolve a little in the presence of Shaboo. “Just, um…Just, no. I can’t drink.”

“Well, shit, that’s alright. Mind if I get another Guinness, though?” He gestured to a waitress. “It’s so funny, I was just thinking of you.”

“Yeah, that writer’s workshop we took. Remember old Fontenblach? What a piece of shit!” Shaboo laughed. The waitress appeared with a pint for Shaboo and looked at JJ.

“Are you still writing?”

What was he supposed to say? That he had drifted aimlessly? That he had moved back home to find himself and had won the lottery instead? That he had taken a drunken money bath? That nothing filled the oozing hole in his soul?

“It’s not that type of farm. Listen, I’m kind of in trouble here.”

“I could kind of tell that.” He took a deep foamy swallow of his pint and leaned in. “Shaboo is listening.”