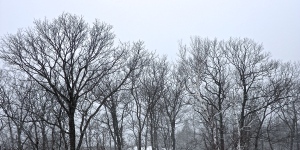 It wasn’t the uphill, it was the downhill that was difficult on the icy parts of the trail. Gravity doesn’t help in these situations. JJ hiked carefully down the steep section between Sheep Mountain and the little valley below the ridge. An ashen gray sky, very close to the ground, and a couple inches of hard icy snow crunching underfoot. Seventeen degrees and the dead of winter.

JJ stopped and it was suddenly quiet without the crunching of his boots. There was a distant hum from the interstate on the far side of the mountain and then he heard, as if an echo of his own movement, crunching footsteps coming up from the valley below. A shape moving through the trees below, coming straight up the trail. JJ waited for him.

The man was intent on his climbing, trudging sure-footed at a good clip, and he only noticed JJ when about ten feet away. The man stopped, unsurprised. “White-tailed deer,” he said, gasping a little.

“White-tailed deer. Back that way,” he said and pointed back down the trail. He was catching his breath. “Three of them. Ran up the rocks like it was nothing.”

“Yeah. And did you notice the winter trees. The bare branches reach for the sky like capillaries. Or blood vessels.   Without the leaves I mean. The silhouettes of the branches reach into the sky, yearning. And they get nothing. Not this time of year.”

“I do get the capillary thing. Not the yearning, though. They’re kind of beautiful.”

“Yeah. Kind of like a lot of these people everywhere, reaching for something that can’t be had. Reaching for the sky, but stuck in the ground. Beautiful but doomed to be stuck.”

“It’s just nature. Some people are birds, soaring. Or song birds, perky and social. Some are burrowers, like possums, nocturnal. Many people are trees, rooted and stuck in place.”

The man took off his hat and looked up at the sky. Mucus was frozen in his moustache and his sweaty head steamed in the cold. “I haven’t figured that out yet. Maybe I’ll never know.” He put his hat back on. “Which are you?”

JJ thought of Lila and not drinking anymore and the money he won. “I think I was a dying tree that’s turning into something else.”

“Yeah. Sometimes there’s magic at work. Alchemy.” He looked hard at JJ. “I’ve had a lot of time alone.”

“Take care,” he said and continued trudging up the path. JJ noticed the spikes attached to the bottom of his boots, gripping the ice, giving traction.

“I want more traction,” JJ said to himself. “I’m no bird. But, I don’t want to be a tree stuck and reaching to an uncaring sky.” He thought of the white-tailed deer, bounding effortlessly up the hill. He had seen them up here as well, usually in the morning or near sunset. They were silent and watchful, ready to move, graceful, and always in a small group.

“I’m definitely a land animal,” he thought. He started back down the trail, careful of the icy spots, picking his way gingerly. “I’m no deer, though. That’s for sure.”

Pots scrubbed, food away, and a bottle of Scotch, two thirds full, found on the floor next to a chair.  Maybe half-hidden by a family member to spare the feelings of the nondrinking JJ?  Then left behind, which baffled JJ, who never forgot a bottle of liquor with any moisture inside.  Thanksgiving over and everyone gone, a heavy silence after a day of eating and noise.  A pregnant silence in an old farmhouse, JJ all alone up on this hill with a bottle of Scotch someone left behind.  He should be giving thanks, reflecting on his friends and family, on a big game of touch football with nephews and siblings.  And the turkey, roasted real nice with all the trimmings.  And the teamwork in the cooking and the cleaning up.  It was a perfect day, a true housewarming for his farm that wasn’t a farm.  This day, this Thanksgiving, was an undeserved gift from the great spirit that can line things up for you then tear them apart.  “We tear them apart,” JJ thought.  “I tear them apart.”

An old memory of sitting next to train tracks at night drinking Dewars from the bottle.  Rocker was there.  They were on acid and screamed and danced when the freight train rumbled by.  JJ had to tackle ol’ Rocker from jumping onto the train and they both collapsed, laughing like loons in the gravel next to the tracks.  They killed that bottle of Dewars and JJ remembered the next day, Rocker on the couch vacant and pale, groaning, “Scotch…..Scotch….” over and over, hugging himself and gently rocking.  Rocker rocking.  JJ couldn’t remember his real name, if he had one.  Maybe Rocker was his real name.

JJ remembered another couple bottles of Scotch, packed into the Mt. Zirkel Wilderness, near Steamboat Springs.  Carried that dead weight for 9 miles to a beautiful valley at the head of which Mt. Zirkel presided, craggy and inviting. He camped alone and looked at the mountain.  It was calling, needing to be climbed, not that hard, good approaches he could plainly see, just a bit over 12,000 feet.  But JJ sat there for two days, drinking Scotch, smoking pot, and reading a Cormac McCarthy novel, the grim one with the Judge and the Indian scalps.  Not a bad way to spend time in the mountains, but not very vigorous.  Or social either.  But the simplicity and the solitude.  And the huge silence and all that wonderful space.  And the Scotch going down with mountain water.

There was some term for this thinking. Euphoric recall?  Yup, that sounded about right.  He knew, with the little part of his mind that was still his own, that he was leaving out quite a bit.  Like the aftermath and such.  The compulsion to keep going, an all-body compulsion to keep drinking at all costs, an indescribable thirst.  And all the consequences of simply checking out.  The losing of things.  Friends, family, stuff, self-respect, hygiene.  He knew he was leaving all that part out.  But you know what?  “Fuck it,” JJ muttered.  “At least I’ll use a glass.”  Then a dark chuckle.  “You’ve come a long way, baby,” he said to an empty house.  And so winter began.